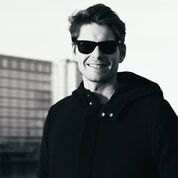 About a year ago my colleagues and co-founders Daniel Jack Mason and Marc Astbury stayed in an Airbnb in Shanghai, China, and met a Swiss designer who goes by the name Jonas. Having previously worked in North Korea on prosthetic limbs for paralympians, Jonas immediately fascinated the two. Based on this we decided to work with Jonas on bringing his unique, upcycled designs – which all tell their own fascinating stories – to the European market.

My name in Parjanya Christian Holtz, I am 28 years old and have just graduated from Lund University with a Master’s degree in Entrepreneurship and Innovation: New Venture Creation. I previously lived in San Francisco and Vienna, worked for Apple, and did a bachelor’s in International Development as well as Publishing and Communications at the University of Vienna.

Our main goal is to establish Jonas Co. as a successful interior design brand that is known for releasing unique design collections from around the world, telling the stories of both the products themselves and the designers behind the products. With the release of our first collection imminent, we will spend most of our time preparing for the launch, talking to potential resellers and coming up with a strong marketing plan to accompany our launch.

We expect to gain our first traction in the market and to actually get the ball rolling. As starting out is perhaps the most challenging part of any venture, we hope to be able to use the time provided to us with the help of the scholarship to fully focus on the project’s successful takeoff and make sure we are sailing in the right direction.

Since the beginning of Leapfrogs we have launched our online store Jonasco.eu, have worked on our packaging design and on finding the right producers, further worked on building our relationship with retail partners in Copenhagen, successfully signed up our company for Crowdyhouse and Houzz (two incredibly influential online interior design magazines) and worked on our marketing efforts through Instagram and Facebook. Additionally we have researched import duties for our products into Europe, and contacted potential marketing influencers and collaborators in London.

Things are definitely going according to plan, at least as of right now, but sometimes I get a bit impatient and frustrated and wish things would move quicker. But that’s because in our minds we have a specific vision of what the project can be, so mentally we are already three steps ahead. It’s kind of the pain of any creator out there, whether you are an entrepreneur or artist, the disconnect between your vision and the reality will always be there, and you constantly fight to make it smaller.

I think we will mostly follow our original plan of perfecting our core product and value offering, and then expand things from there. Obviously plans tend to change over time, no matter how solid or perfect they may seem from the get-go, but as of this moment things remain similar to how they were only a few weeks ago. Perhaps this is also because we have already been working on this project for quite a while before Leapfrogs, so we are mostly in executing mode right now.

The three months were an interesting experience because for the first time in my life I was able to fully focus on the project I wanted to work on. This was both scary and great in the sense that I felt the pressure of wanting to live up to my own expectations, but also profited from the freedom on being to take fully responsibility.

I think the hardest part was creating my own structure instead of having someone, such as a school or university tell me when to hand in what and how to do it, which gave me an unexpected amount of freedom that was almost a bit overwhelming, but this also allowed me to fully focus on the things that I thought made the most sense, giving me a sense of control.

There were some unexpected speed bumps along the way, forcing us to think creatively and be persistent in finding the right solutions, and we’re still struggling with some of the issues, but I definitely plan on continuing the project as I’ve already invested this much time and energy in the project, and giving up now would be rather foolish.

Expect failures but don’t see them as the end of whatever you are working on. Instead try to view problems as learning opportunities that will help you overcome even greater challenges in the future.

Be persistent, never take no for an answer and connect with as many people around you as you can. Being an entrepreneur is tough, but also the greatest job in the world.